Transcontinental railroad by the numbers: 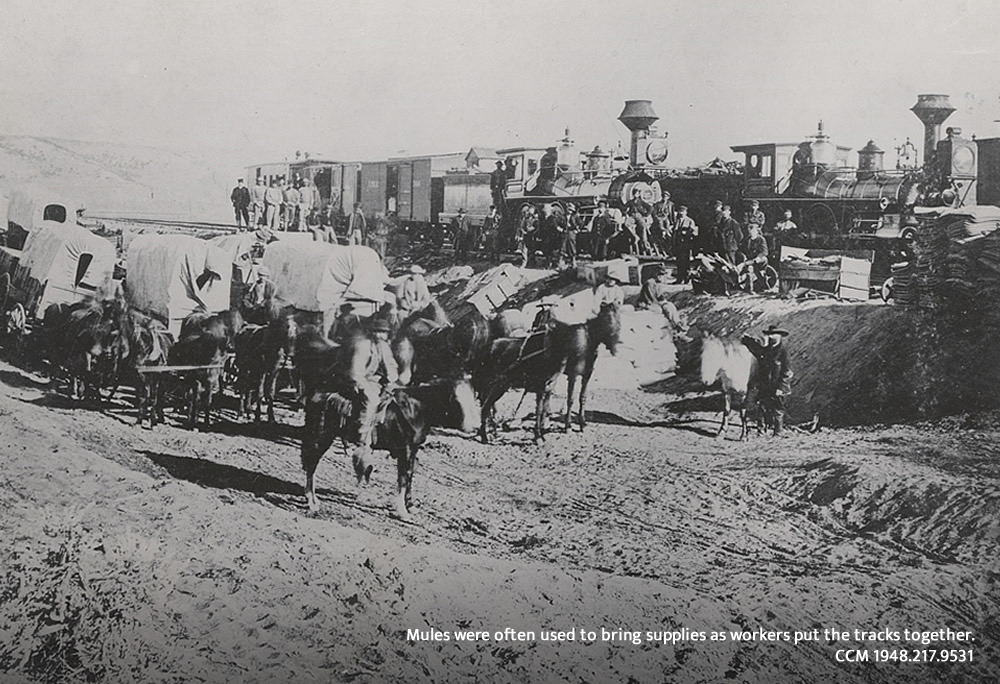 The two companies competed to see who could build their portion of the railroad faster. The railroad was officially completed on May 10, 1869, when the two railroads joined in Promontory, Utah.

Construction on the Union Pacific Railroad reached what would eventually become Carbon County in the summer of 1868.

Wyoming became a United States territory on July 25, 1868, around the same time the railroad reached the North Platte.

Early trains relied on coal and water for their steam-powered engines which needed to be refilled regularly. Many of the towns that sprang up along the railroad in southern Wyoming had coal mines nearby that supplied the coal for the trains to run.

Some of these towns, such as Rawlins and Hanna, still exist while others, like Carbon and Benton, are ghost towns.

There were also several forts built along the railroad to protect from Native American raids, including Fort Fred Steele in 1868.

Laying a railroad took thousands of workers, many of the workers on the railroad were Chinese or Irish immigrants. Others were Civil War veterans. Working conditions were difficult and workers were paid roughly one dollar per day.

As construction progressed, small towns appeared along the route including housing, food, supplies, and entertainment. These towns, called “end of track towns”, were quite rowdy with gambling, prostitution, and drinking.

The most infamous railroad “end of track” town in Wyoming, Benton, was located about 12 miles east of Rawlins. Benton only existed for about 3 months: July to September 1868 and reached a population of roughly 3,000.

Benton was home to 25 saloons and 5 dance halls. As you can see from the photo, the structures were largely tents, making it easier for the crew to set up and take down the “towns” as the construction progressed.

The town was left behind by the railroad at the end of the summer and the only evidence of Benton’s existence is the 100 or so graves left behind.

The completion of the transcontinental railroad meant an explosion of population in the American West.

Whether it was workers who continued to work for the Union Pacific or new settlers, the growth of the railroad brought new people to towns across Wyoming.

By the time Wyoming was admitted to the Union on July 10, 1890, the Union Pacific was moving people, goods, and supplies across the state daily, enhancing communities and creating jobs.

Throughout the late nineteenth and early twentieth centuries, the railroad was the preferred method of travel, especially for long distances. In the 1900s, trains carried people separately on passenger trains versus freight trains which transported cargo.

In Wyoming, families would often board the train to visit family in other towns regularly well into the 1970s. This was partially due to the weather conditions, but also because it was so convenient to take the train and relax until you arrived at your destination.

“We always took the train to Laramie to visit family; it was so easy and it did not matter what the weather was, the train ran in all conditions.” – Kenneth Klouda, retired Union Pacific Railroad Worker.

Improving technology changed how trains were powered: diesel-powered locomotives were developed in the early 1900s and by the 1930s they started replacing steam-powered locomotives for passenger trains. Freight trains transitioned to diesel locomotives after World War II. They are still the main type of locomotive used today.

They are also cheaper to maintain and do not require as many people to operate. Most modern freight trains can be run by just 2 people: a conductor and an engineer.

Here is a visual comparison of steam and diesel engines: 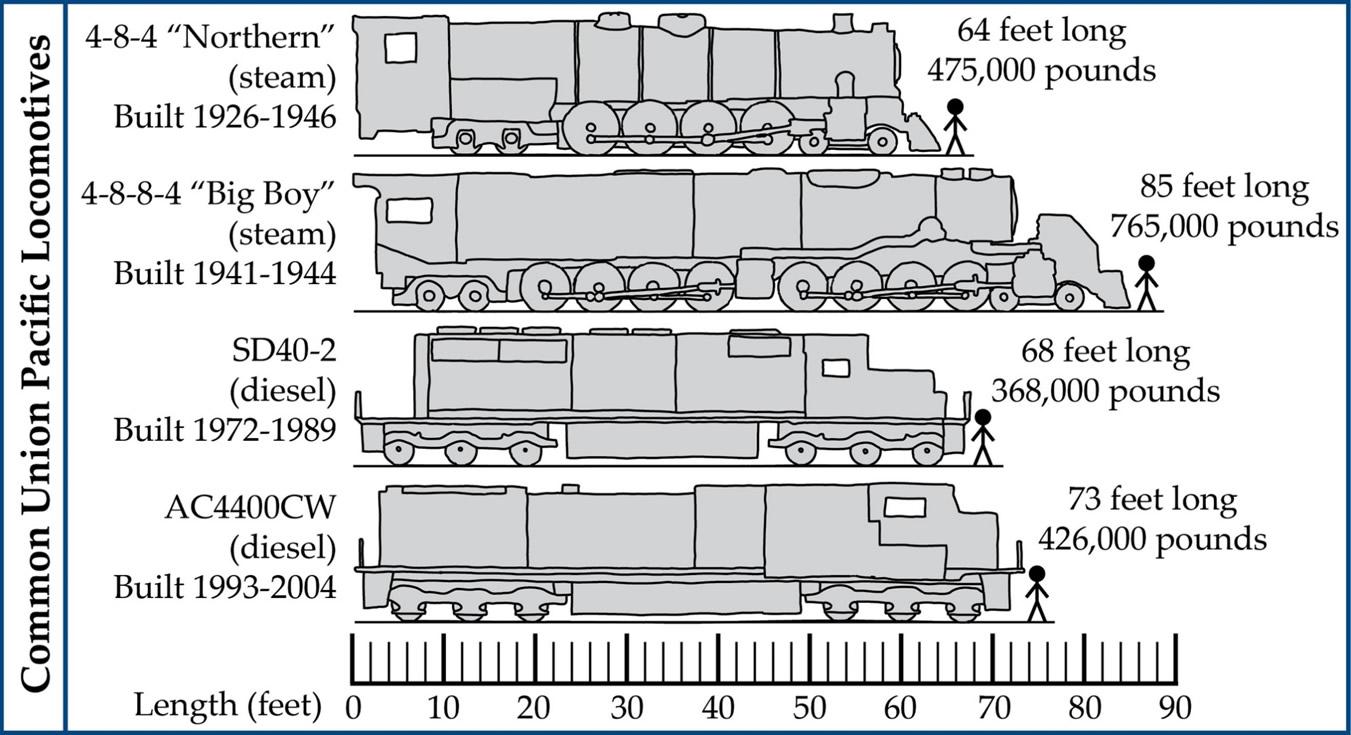 Unlike a freight train, a passenger train needed 2 crews: 1 to operate the train, and 1 to serve the passengers. A conductor was in charge of the whole train, an engineer operated the locomotive, and brakemen and firemen took care of various duties. A director managed the crew inside the train, helping the passengers. These included porters, stewards, clerks, and even cooks. 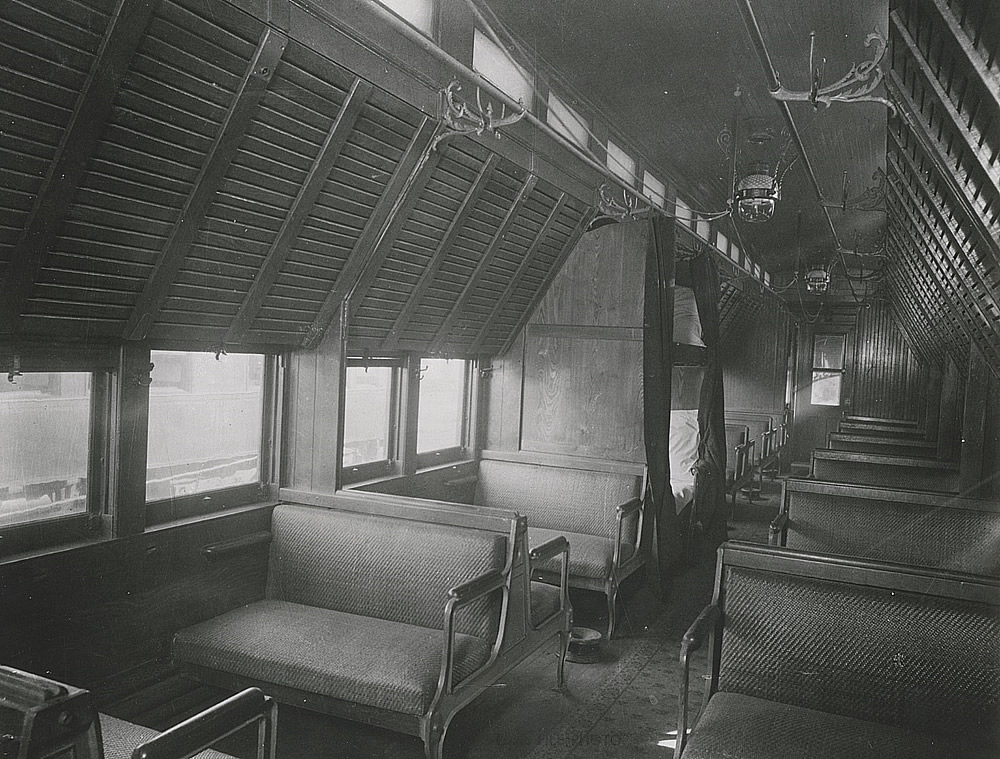 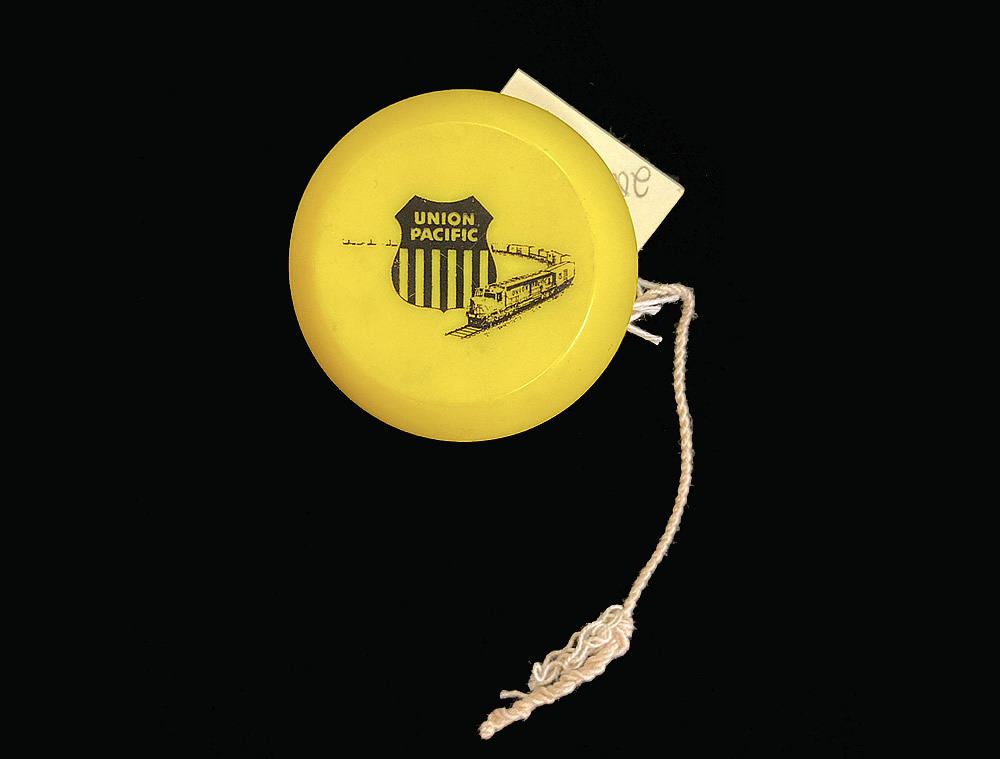 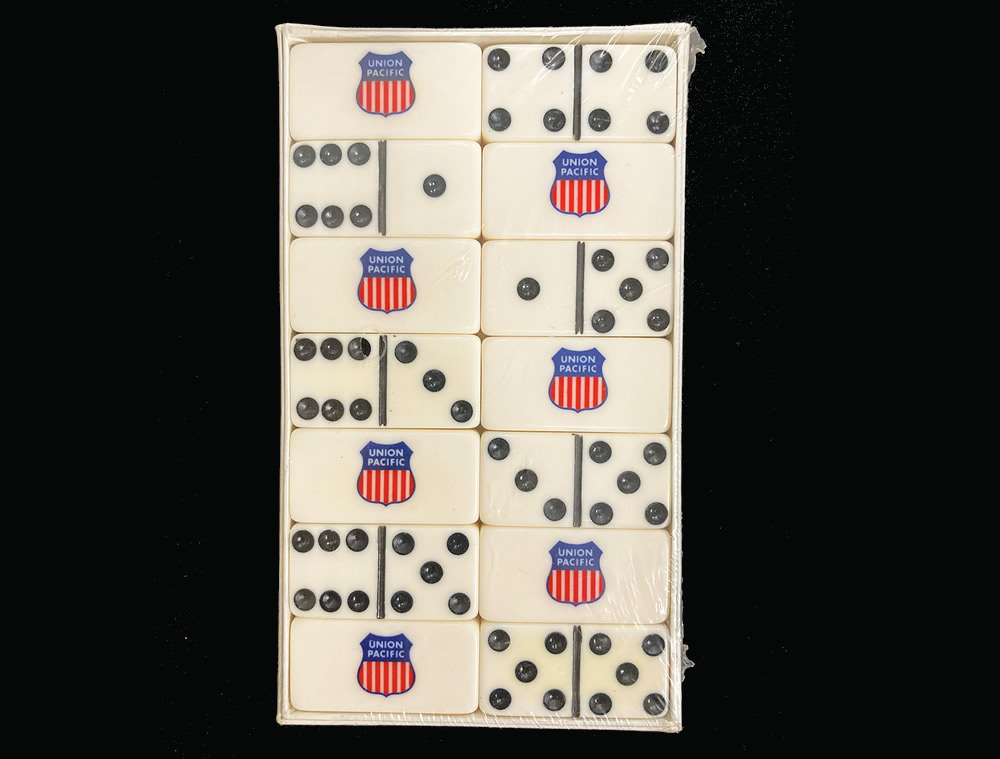 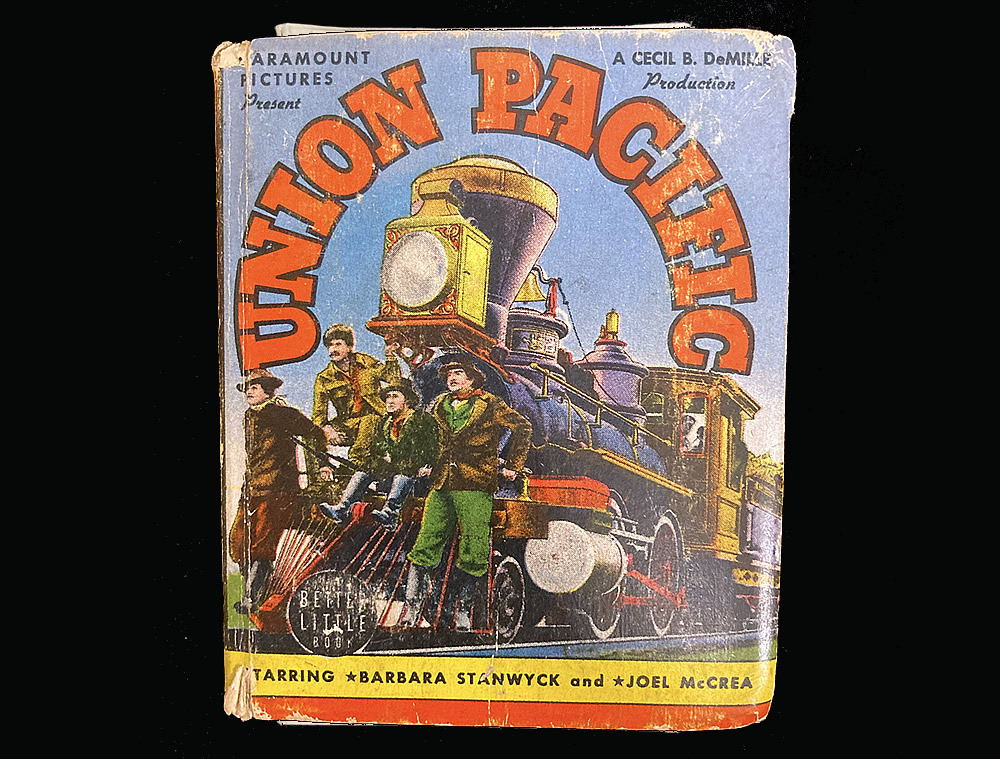 The Union Pacific made traveling by train a luxurious experience: separate cars for dining, sleeping, and traveling were beautifully furnished to offer passengers fine dining and accommodations that made traveling enjoyable.

Everyday items used on the trains or to promote the Union Pacific was branded with their logo.

Dishes, towels, glasses, even fun items like yoyos and games all had the UP logo as part of their design. In today's terms, Union Pacific created a lifestyle brand.

Whether you worked on the trains or at a depot, or if you were part of the traveling crews, working for the Union Pacific Railroad provided people with a good income and a steady job. Crews who worked together for many years became their own “work families” where they often stepped outside of their own assigned tasks to assist one another. The goal was always to keep the trains running smoothly by working together. 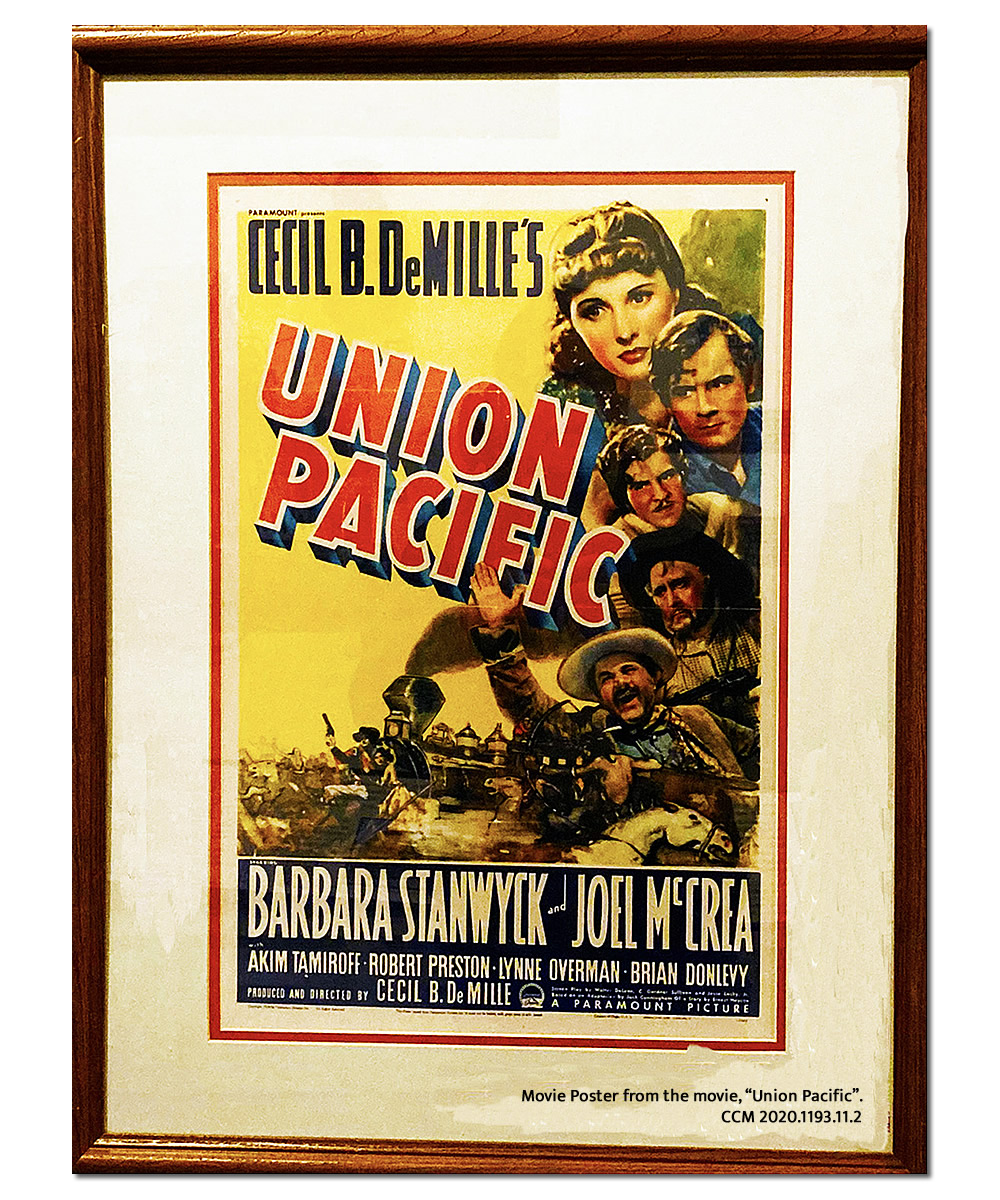 Popular culture of the twentieth century celebrated the Union Pacific and the romance of traveling by train. Cowboys, train robbers, and lawmen were the subjects of many artworks, books, and songs.

The classic 1939 film Union Pacific, directed by Hollywood giant Cecil B. DeMille, was a story about two men working for competing interests during the building of the transcontinental railroad. It starred Joel McCrea, Barbara Stanwyck, and Robert Preston.

The movie was based on the 1936 novel Trouble Shooter, which was in turn based on the real-life experiences of railroad engineer Charles H. Sharman. Cecil B. DeMille worked closely with the Union Pacific Company to produce the film, including using real trains. He was even able to use the original ceremonial golden spike when he recreated the celebration of finishing the railroad for the movie.

The impact of the railroad on American culture can still be seen in other ways. Many children still learn the traditional folk song “I’ve Been Working on the Railroad”. Country, blues, and folk singers in the 1950s and 1960s often referenced traveling by train in their music.

Many common phrases are based on railroad terms: a disaster is often described as a “train wreck”, and an office worker who helps with a project is “picking up the slack”. Someone hard at work can be “chugging along”. A person can “pick up steam”, “go full steam ahead”, and eventually “run out of steam”. 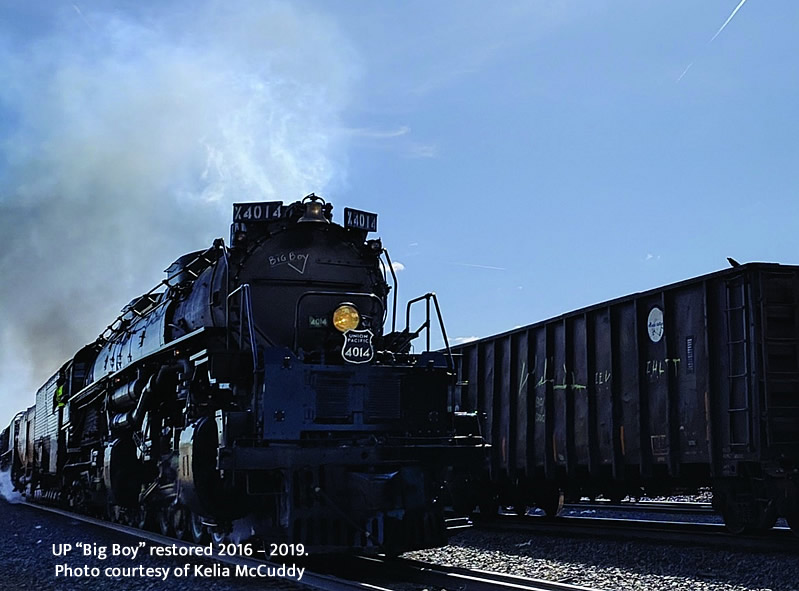 Although train travel for passengers is no longer as popular as it was in the 20th century, the railroad remains a way to transport freight, goods, and military supplies across the country.

In some areas people utilize Amtrak to commute or to travel into urban areas, but ultimately planes became the preferred method of travel for people going long distances.

For counties across southern Wyoming, including Carbon County, the Union Pacific Railroad continues to bring goods, supplies, providing a source of steady employment.

This exhibit was made possible through kind generosity and support of the Union Pacific Foundation Local Grants Program. Special thanks to Rick Durrant & Ken Klouda for their contributions. The Carbon County Visitors Council also provided funding support.

History is Happening Now, and YOU are a Part of it